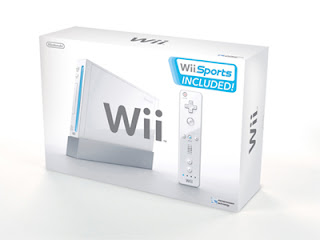 So I've barely blogged this month. Of course I could throw blame towards the wee ones (don't get me wrong, a good enough excuse in itself), in all actuality it's because we purchased a Wii. A magnificent specimen of video game greatness.


It all started back at Christmas time when my father (now apparent Wii-trendsetter of the family) brought it over to add to the Christmas festivities. He left it at our house for what was going to be a few weeks. When he finally wanted it back, wii were hooked. Wii had to stalk a few Gamestops to actually procure the unit. It was way back in March when they were rarer than a clean toilet seat at a seedy trucker rest stop. Since then wii have really embraced all that is Wii. Wii got into the sports, bowling especially, and who knew I could be a pro golfer let alone a tennis star? Then I found a rather amusing side light of the game, the art of Miis.

The Mii is a tiny avatar or cartoon representative of yourself. We started out they way most people do, which is to make a little you (mii) and then play the games with them. Well I started to make everyone in the family, then extended family, then friends, then extended friends, then random celebrities (Michael Jackson, Sally Jesse Rafael, GWB, and Jesus to name a few), then obscure celebrities (food network stars, late night talk show hosts, a blind Mary Ingalls) I just couldn't stop. Wii have a whole practical army of little Mii's now. They are cute, they are many. My favorite aspect of this side hobby is a game of Wii baseball, where a random group of Mii's is assigned to play on your team. In what other situation would you be playing a game with the following: An alien, Minnie Mouse, Conan O'brien, Weird AL, Lionel Richie, Mr. Potato Head, Alton Brown, and Mr. T? It sure makes for strange yet hilarious bedfellows.
So in short, wii will try not to let the Wii interfere too much with my blogging extraordinaire... at least wii hope so...
Posted by Jenn at 2:32 PM

Not to mention that I gave you Guitar Hero III for your birthday and you haven't let the guitar even attempt to gather dust.

You ARE the Guitar Legend, but my skills are improving and will overtake you... some day