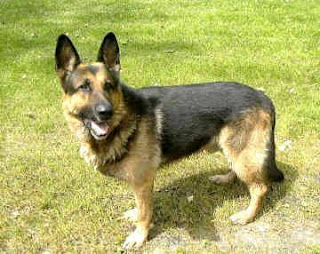 Anyway, the bus use to drop me off a few blocks away from my house. As I would pass this one house there was a giant German shepherd dog (I nicknamed him "Killer") who would aggressively cross the street, bark, nip at me, and generally scare the crap out of me daily. I begged the bus driver to take pity on me and drop me off a block early BEFORE his house but she never would. My dad decided if the dog knew me he wouldn't try to attack me, so we went over to Killer's house one day when the owner was home. Well Killer turned into a friendly, happy, perfect, smell your crotch and lick your hand dog whilst the owner was there... it was only when he wasn't home and I was walking alone he turned into a raving barking growling terror.
Fast forward to a few months back when my hubby and I were driving near my folks house. We drove by Killer's house and there he was, still sitting in the same place, looking mean. I say to my husband evilly... ha ha!! I have a car now, maybe I'll just run over that scary Killer now that I have the upper hand (I'm an animal lover, mind you, so you PETA people CHILL OUT, I'm being momentarily maniacal here). My hubby pauses for what seems a few minutes when he quietly says... that's not the same dog. I'm like.. YES it is. Sitting in the same place, looking mean, come on!! He says mildly... think about it. WHEN did you go to high school? Then I had to stop and think (while cocking my head to one side and squinting, knowing my math skills are fuzzy at best) Um, 10 years? NO WAIT... it can't be... 18 years??!! He's like Yes. Obviously that is NOT the same Killer seeing that dogs can't live that long. The dog you're about to run over an innocent dog, a replacement dog. If your Killer were still alive today he'd be over 140 years old in dog years, he says (momentarily impressing me with his mad math skills). He'd be toothless, harmless, and probably rolling around in a little doggie wheelchair and at best would gum you to death. I couldn't believe it. Has that much time passed since high school?? Holy smokes. I'm old. Dang it. My birthday is tomorrow too. Come to think of it, I'll be 252 in dog years. Where does the time go?? Well I guess it's gone to the dogs.
Posted by Jenn at 1:48 PM