There's a family favorite I haven't made in a while.  Maybe because it still feels like summer around here and a creamy, cook all day comfort food like beef stroganoff really hits the spot more on a crisp fall day.  I had some extra stew meat in the freezer and thought lets take my relatively still new roasting oven/crock pot out for a spin and see how it does on a family classic.  This recipe is great because it is simple, it cooks all day so you can do other things, it smells fabulous, and it tastes so delicious you wouldn't think twice about serving it to company.

The best thing about this recipe is that it only has 4 ingredients: 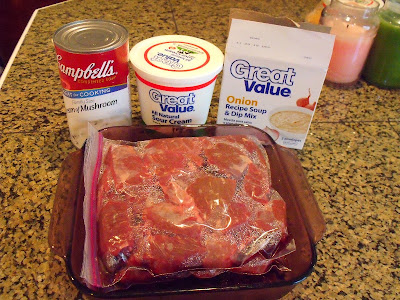 I have made it with just these 4 ingredients and it always turns out fabulous
.
You can also add some extra bonus options if you wish such as:

*dashes of Worcestershire sauce
*fresh or canned mushrooms (I'd do this but would be shunned by the small fry)
*Kitchen Bouquet Browning sauce (see it here) which is a carefully guarded little secret if you don't know about it. In our family it goes back to my mom's kitchen and even further back into my grandma's kitchen.  You find it near the A-1 sauces at the grocery store and put a few dashes into the mix. It helps turn gravies, sauces, and things that are on the gray side, into a nice rich brown color. We use it all the time for the gravy during the holidays to give it a little kick in taste and color. 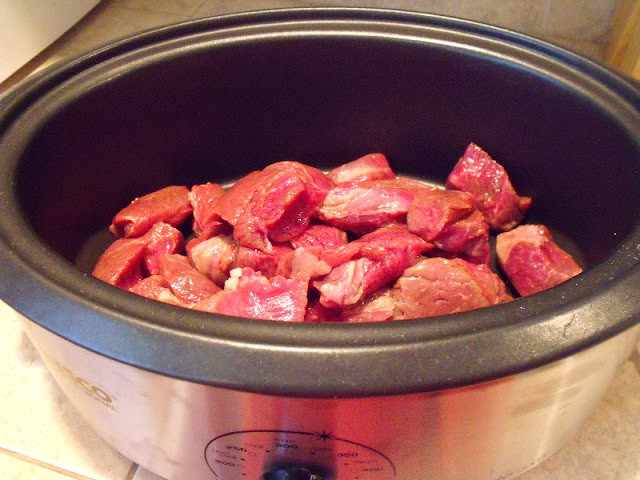 Next, in a medium bowl, combine the mushroom soup, the sour cream, and the dry package of Lipton onion soup mix. 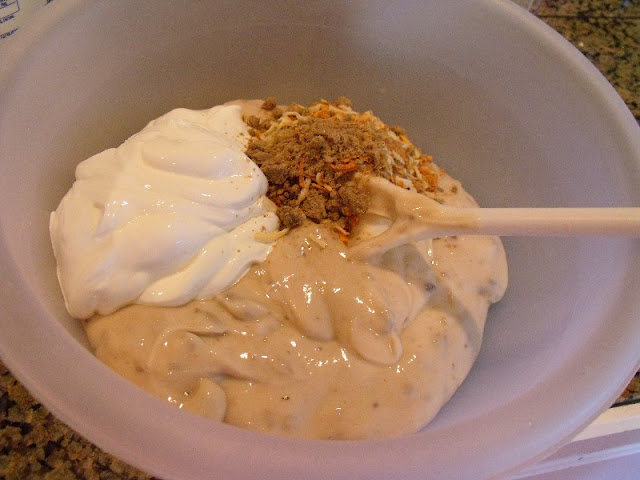 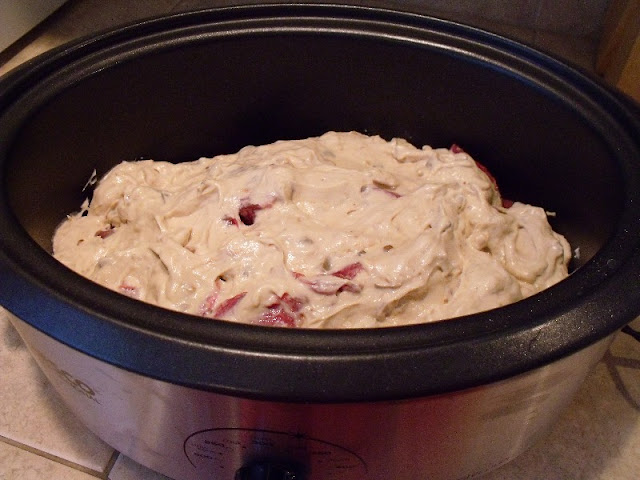 After that set it on low and let it cook for 6- 8 hours.  Now if you have one of those new-fangled too hot crock pots that boil the living snarf out of everything, even on the "warm" setting then this recipe will cook in less time.  If you have a temperature controlled roasting oven like me that doubles as a crock pot, then turn it to around 200º - 210º (below boiling)and cook on low all day.  If you have an older crock pot just set it to low and carry on.

The next time you walk in the door you will smell the most heavenly aroma.  It tells family and even lucky downwind neighbors alike that someone has been slaving away all day to make dinner.  Ha.  Little do they know...  All you need to do now is to cook up some wide egg noodles and serve.  This also works great over rice!  The meat should be falling apart tender and the gravy or sauce is creamy and flavorful.  Test the flavor before serving if it needs any salt or pepper and serve over noodles to a happy and appreciative crowd.

It had been so long since we had made this, that my littlest doesn't even remember it.  She ate her whole plate and asked for more!  Now that's a good sign.  Funny story, a long time ago I had made this dish for dinner, my picky middle child eyed it with contempt... that was until out of the blue I had the brilliant idea of saying it was "Lightning McQueen" meat. (She was a huge fan of the movie CARS at the time, even had a CARS birthday party that year).  Yup.  I told her Lightning McQueen had called and said this was his favorite all time dish.  She tried it and ate the whole thing. I have to confess I used this same technique a few weeks later, letting her know that peaches and pears were Sally's all time favorite fruits.  You would be surprised at how fast she wolfed those down.

This was a very good meal. I am about to enjoy it again as my lunch at work. Thanks for the leftovers!

I decided to try the more "deluxe" version of this recipe that you mentioned...my girl digs onions and mushrooms! :) I browned the meat slightly (seasoned but not floured) for that delicious Maillard reaction;) Your sauce combo is foolproof. YUM! I did add the couple of dashes of Worcestershire sauce AND Kitchen Bouquet that you recommended. To top off everything, I sauteed a whole thinly sliced white onion and a giant pile of button mushrooms and covered the meat and sauce with them. The smell was amazing! After about 5 hours I served this over some egg noodles with a side of green beans and dinner was a HIT! Seriously delicious...it was even better the next day. Thank you so much for this new found family favorite!

This was a hit in our family!!! Cheap, simple, tasty, filling! What more can you ask for?

I enjoyed your story about Lightning McQueen meat! Years ago, to get him to eat his veggies, I told my little brother that He-Man ate corn and Grover (from Sesame Street) ate lettuce...he would gobble it up then! haha!

I have not tried hamburger meat but I bet it would work okay. It would probably work best if it was a lean ground meat that you normally have to drain... Like an 80/20 chub from Costco. Alsoyou might have to break up the meat as it cooks throughout the day. Let me know if you try it and how it turns out!

That was... Normally do NOT have to drain... Regarding the hamburger meat above.

I made this tonight and it was awesome!
Thank you.

I make stroganoff from scratch from time to time for my wife, it is her favorite meal. Although this did not taste exactly like mine it was close and every bit as good. It was easier, cheaper, and way faster. This will now be my go to recipe for stroganoff. I made it just like your recipe but with the Worchester sauce, mushrooms, and browning sauce. I used the roaster oven and doubled the amounts so we would have leftovers. Thanks so much, Chuck Ward

We love this recipe and make it often but we are having unexpected guests tonight and was wondering if i could add a little water or milk to the soup/sour cream/onion mixture before it goes in to help make it feed more people?