Watch this.. you naughty monkeys! 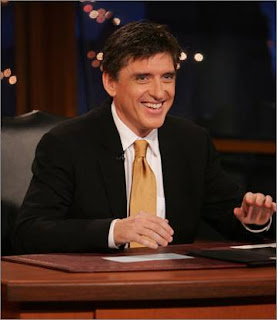 See this man? Do you know who he is? If you don't know who he is, you should. He is Craig Ferguson, Scottish-born comedian who recently became an American citizen. But more importantly, he hosts "The late late show with Craig Ferguson" on CBS at 12:35am.

Now if you're saying.. AM??? I'm not up that late (and or early). If you're one of those terribly dull folks that goes to bed at 9 or 10pm or so then the whole world of late night talk shows might be a bit fuzzy for you. I'm sure you've heard of Jay Leno and David Letterman... now they are funny mind you but they've been around too long if you ask me. If you commit to staying up an hour later you'll be rewarded with even more hilarious programming.

There's Conan O'Brien (my love before Craig) and then if ya flip it over to CBS you'll find my "Craigy" as I affectionately call him. He is a stinkin laugh riot. His monologues are off the cuff and he goes off on the craziest tangents, all in the greatest Scottish brogue. My hubby and I constantly find ourselves guffawing out loud. Whether he's accusing Bob Barker of being a vampire, talking to his imaginary side kick Davis that appeared one night after he'd been taking cold medicine, or telling you why it's a great day in America, it's all funny. His skits/segments are wacky and he takes email questions from real viewers that just plain rock. He has zany sound effects and calls the audience things like naughty donkeys, cheeky monkeys, filthy pigeons. That's right, I said filthy pigeons. When he talks to his celebrity guests it is not "scripted" like on Jay or Dave.... they start gabbing like old friends and the celebrities really open up and tell you all kinds of things I don't even think they meant to say.