Kids sure are entertaining, especially their fresh way they see the world with new eyes. They make you stop and think about the words you say, or common phrases and how they came about, or how very literal something is without you even realizing it. Like a story my hubby told me about when he was a boy. He said one night he was getting ready for bed and his parents said they had to hurry up and go right to sleep because they were going to "dreamland". Well that worked like a charm and he went right to sleep. The next morning at breakfast he asked simply "So, when are we going to dreamland?"... thinking it was a real place, like Disneyland. He was sorely disappointed to find out that tragically, he had already BEEN there in his sleep.

So a few days back I had a laugh out loud moment with my 4-year-old daughter. It had been snowy and cold, and hubby got a craving for a DQ banana split (because when you're cold on the outside, you should make your insides cold too?). So we thought that would be an exciting outing for toddlers who had been cooped up inside for too long, and bundled them all up and packed them in the car for the 2 minute drive down the street. After getting two banana splits to share amongst us, the girls were getting a little too excited and we were trying to make them sit down quietly before they would get some ice cream. My blondie was very concerned there wasn't enough spoons for everyone, but hubby in his wiseness had procured two extras just for them. I quickly say "you will get some right now, here's two spoons and this one has your name all over it". I went back to eating the banana split but what I didn't realize is that she was quiet for a few minutes, not eating ice cream, studying the spoon. Finally she pipes up.. "mama, this doesn't have my name on it".... Poor thing, for the last few minutes she had been scouring that plastic spoon for her name. It was too cute! I had to explain to her what I meant and she went back to happily eating ice cream. I think she is a pretty quick study though because one day later my hubby handed her another spoon and said this has got your name all over it and she replied with a sarcastic... ha ha. Kids are literally the greatest!
Posted by Jenn at 10:46 AM 1 comment:

The first flush of the year 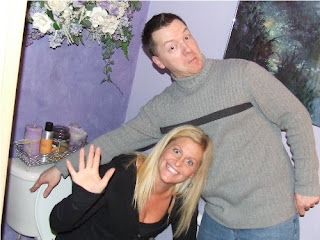 So Happy New Year 2009! I hope you had a merry Christmas and a happy little New Year. We have a little tradition in our household, which started way back in college. I invented the very appropriately named "the first flush of the year". Excitedly we would all wait around for the stroke of midnight like the rest of the good people of earth, but shortly after kissing our loved ones when the clock struck twelve, we would dash through the house to find any available toilet to flush. Gleefully we would press the plunger down and joyously shout "HAPPY NEW YEAR". It symbolized the flushing away the old year and getting that clean fresh bowl for the new one. These handsome display models here show you directly how to get the most bang for your buck for this new tradition, try sharing the whole experience with a friend or two. Try explaining this picture in any other context and you're sure to get some funny looks. So even though 2010 is a long way off, resolve right here and now to add the first flush of the year to your next New Years repertoire.