Play-doh the clay of Satan 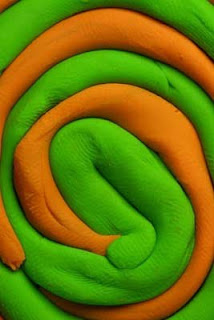 If there is one toy I could pin point as pure evil in this world, it would have to be my nemesis, play-doh. Oh sure, it looks harmless, it's colorful, the kids adore it, what on earth could I have against play-doh? Well many things. First, it has it's own smell. Back in high school I worked at a daycare. They had elevated play-doh to an almost worshiped substance there. It was revered and utilized daily... which meant I was cleaning it out of the carpet fibers and little bitty plastic kids chairs, and tiny fingernails daily as well. Back then it seemed play-doh had a much stronger scent, and it was quite overpowering. I think those fine people at Hasbro have toned it down a bit because when my kids cracked open their first play-doh (a gift mind you that I had set aside to take back but but the box was gleefully ripped open when I wasn't looking and therefore we had to keep it) I was expecting to be blown away by the stench, but alas it was more a mere gentle whiff of the play-doh of yesteryear. It seemed softer and more pliable too. Back then the nasty stuff would leave a chalky residue on your hands when you were finished, but this seemed less powdery, perhaps I should give it a second try. I thought hey maybe times have changed, technology has caught up with the preschool set... but indeed, I was wrong.

It's still the same old clay. It gets hard and crusty within days of hitting the open air, begins to crumble on contact, the colors get mixed up, it falls on the floor collecting hair, dust, crumbs, only to be scooped up and mixed back in with the parent ball so by day three you've got this dense dry cluster of floor garbage mixed in (a thought that gags me for some reason) and a clump so hard your 2-year-old can make a ball out of it. Then there are the accessories. Many times it comes with some sort of device meant to smoosh the play-doh through a tight space, to make hair, legs, squiggly things, although the brainiacs at Hasbro headquarters must never spend time playing with their product because they leave no easy method for prying the play-doh OUT of the contraptions. It gets stuck in there and hardens making it impossible to use it again. It makes one want to pitch the entire disdained lot out the back door. Grrrrr.
So apparently I am not the only woman to suffer from a hidden play-doh hatred. Just the mere mention of play-doh to a group of tired mommies will bring out cries of anguish and disgust. I have yet to cross one mother that does not detest the vile stuff. How is it that a toy that is loathed by one set (the grown ups) is adored by the small fry? It's the first toy they ask for, the first one out on the table with these little faces looking up at you saying mama play with us. How can you resist? So you cave fully knowing you'll be crawling around under the table in a few minutes dabbing the crumbs and sweeping the rest. I must love my kids a lot because I let them use play-doh. I should be nominated for saintly mother of the year for that one alone. I'm pretty sure the devil sits on a giant dry, cracked, hairy crumby throne made of multicolored play-doh, just another reason I'm not going there in the next life.
Posted by Jenn at 2:47 PM

I agree it can be a pain to clean up, but it sure is fun to play with... remember the play-doh birthday cake I made for Viv?

My sis used to make play dough for her kids when they were little.

There are a lot of recipes on the net for making the stuff. I wonder if any of them clean up better.

Of course, I'm not curious enough to actually do anything about it. :)

I hate play doh with my inner most being.
Miss. Michelle

Maybe if you put KY jelly in the contraptions that the Play-Doh is supposed to be smooshed through, it wouldn't get stuck in there. (However, it probably would create an even nastier new texture to the darn stuff.) I'm glad to be done with Play-Doh!

I love the smell of Play-Doh in the morning!! Mwahahahaha!