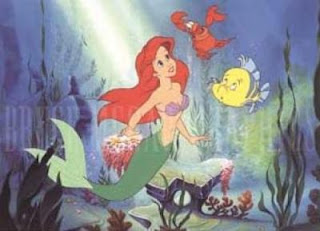 Ok so I haven't blogged in a while... since Summer to be exact. In my defense the wee ones around me have been keeping me running in circles for the most part. I'm always on the verge of putting two coherent thoughts together when it's interrupted by a cry, a poop, a scream. Finally tonight I got them all asleep at the same time (a planet aligning event for sure) and thought hey, in lieu of a shower, paying bills, or catching up on some shows, I'm gonna blog darn it. So be happy, and let me tell you the story of the "Tainted Ariel".

So we got these juice things at the store, they are part sippie cup, part juice box, and part greatest invention ever. Mostly because they are reusable, almost completely unleakable (sure it's a word), 98% indestructible, and are topped with kid-friendly characters from Disney and PBS for starters. Plus, what kid alive doesn't want to suck juice right out of the skull of their favorite childhood hero? They are ingenious really. The character at the top spins freely, so that little hands can't take off the lid, thus preventing the spilling 8 ounces of juice all over your recently steamed-cleaned carpet. Once you drink the original apple juice you can refill it with water, sugar-free juice. Just pop um in the dishwasher and they're good as new! They last for a long time too, we have some over a year and they're still going strong. The kids love them. They are narrow, providing easy grip for little hands, AND they slip into overstuffed diaper bags nicely.

So you're probably saying to yourself... what's the bad 2% you speak of? Well kids have probably found the one loop hole in this otherwise unleakable (I'll say it again) product. They have found if you shake it REALLY hard, juice will come flying out of the top in a nice spray. This albeit fun and festive practice has been nipped in the bud, so to speak, so we're good there. This was a mommy thing that in one fell swoop, ruined one of these juice sippies forever.
Well poor Ariel was being washed in the top rack when somewhere in the initial rinse cycle, plummeted to the bottom of the dishwasher and landed (I think) on the heating element. Whilst unloading I found her in the bottom of the brink and twisted her back up on her sippie pedestal and stashed her in the cupboard. The next day at lunch things were going great. One had Elmo, the other, Ariel. Suddenly there was a shriek from the table and Ariel was tossed quickly to the ground (Did it leak when it hit you ask? Nope, aren't they great?) Upon closer inspection the front of Princess Ariel was A-OK! But turning her around it was the back of her head, which I hadn't noticed before was melted into a black lump of goo. It looked like a demented mini beehive and it freaked my 4-year-old out. I tried to "reason" with them, showing that Ariel still worked just fine, but the damage had been done. They won't even look at her now, so I'm going to have to toss her, even though she's only a few months old (sniff). Here's her new song (singing dramatically): Down where they slip, down where they fall, down where their head melts into the wallll...... lumpy and wild, frightening the child, and leaving their world...
Posted by Jenn at 10:02 PM