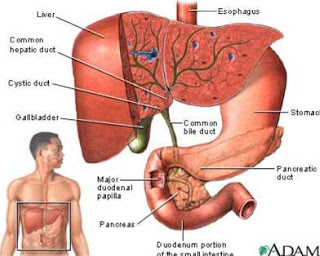 So up until now, me and most of my internal organs have been getting along splendidly. It's probably the same for you. Heck, if they are working just fine, no one really probably gives them a second thought. Well, a few weeks back, my gallbladder got peeved and decided to give me the what for. This might be on the most part a tiny, understated, rather forgotten organ but when it gets pissed off all hell can break loose. What IS a gallbladder you ask? Well it's this little sac that sits under the liver and stores extra bile for a time when the liver needs a little extra help on digesting big meals. If you are so inclined there's a retired general surgeon that explains it perfectly here:
http://surgeonsblog.blogspot.com/2007/03/rocks-in-bag-what-i-know-about.html
So my attack started as an aching pain in the center of my back which increased in pressure then shot through like a samurai sword to the front of my chest under my sternum bone. From there it got progressively worse and more intense. I felt like my heart was going to explode. I can't even describe the pain really, although most people say it's worse than childbirth. Well I've had three babies and they ain't kidding. That's practically an understatement actually. I literally thought I was going to die. We eventually called 911 (a first time for everything) and I was brought to the ER.

Long story short, I had stones and I had to have it removed. Where did these stones come from, you ask? I guess most people have them. Most of the time they hang out in your innards uneventfully. Sometimes eating a high fat or greasy diet can cause them to crystallize, OR, and this one is ironic, weight loss and a low fat diet can also cause gall stones. It's like, damned if you do... damned if you don't. I just lost 45 pounds this year, while pregnant mind you, and in a slow and healthy way to boot. Then I had baby #3 seven weeks ago. Well turns out having three babies in short succession doesn't help either. Our good buddy "estrogen" (the bitty) likes to contribute to making the stones get harder faster. This is the kind of stuff other people don't tell you and you only find out after you have kids. So this prize combination of winning factors caused my gallbladder to revolt and try and kill me (Well at least it FELT like it was trying to kill me. He really gave it the college try, although I'm still alive and kicking).

So besides my c-section scars I am now sporting a sexy four-hole addition to my mid section. Sometimes I'm afraid to drink water for fear I'll start leaking like a sieve. Luckily they are pretty small and should heal up nicely. Matter of fact medical science is a stinking miracle! Here it's been a week since they removed an ENTIRE organ from my body and I'm pretty much ok. Walking around (with some pain mind you) but not too much worse for wear. It's amazing if you think about it. So that's it for now, but try and be nice to your innards... just in case.
Posted by Jenn at 6:39 PM

Email ThisBlogThis!Share to TwitterShare to FacebookShare to Pinterest
Labels: about me