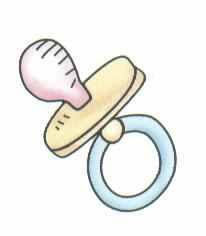 So recently my husband and I tried out a new fun hobby. It's called, break your three-year-old from using a pacifier. Now I know not every kid gets addicted to "the bink", I'm sure there are many mommy nazis out there who say it's a crying shame to even give one to your kid in the first place. Well in my defense I can totally blame a random labor and delivery nurse for introducing a bink to my newborn whilst I was recovering from a C-section. She appeared literally at 2am and whisked the baby away for a check up, shots, and whatever else they needed to do (my guess was just to torture and wake up the tired mommy, but I digress). When my daughter returned she was happily quiet, wrapped up like a burrito, and sucking on a newborn pink bink. She looked content and sleepy so I thought, what the hay.
Flash forward three years later and my little one was still totally addicted to that thing like nobody's buisness. We had tried (unsuccessfully I might add) to rid ourselves of the bink at earlier times, but it never did quite work. After reading up on some parent tips online and watching a few episodes of the super nanny we felt armed enough to try it again.
After a few years, we were left with only three binkies when my hubby started plotting their demise. First he cut the tip off of one and left it where she would find it. She came over with the saddest little face and said, mama, my bink broke and proceeded to immediately throw it away! We looked at each other with surprise... was it going to be this easy?? Should we have done this years ago? Ah not so fast. She instantly found the second bink and popped it in her mouth. A few days go by and we actually lost the seond pink bink... and then there was just one. A few more days pass and we decide this will be it. Snip goes the tip and we give each other the look like, now there's no turning back and we're screwed. About 15 mintues later she finds it, does another sad face (the saddest ever) says, my bink broke, and tosses it away. Now we wait (in panic mode) as night approched, wondering what would happen when she asked for it.
Now I'm not going to lie, that first night she had trouble falling asleep. She recanted the story of her bink breaking and throwing it away, and I think she finally crashed at 2am. But seriously, the next day, she didn't even ask for it. We were so shocked! It's been a week now and she is totally free from the bink. Success! Well sort of. Now that she's off the bink it must of given her extra thinking time to figure out other clever things like how to crawl out of her crib and climb the safety gate to downstairs, unlock the front door... but that's another blog...
Posted by Jenn at 2:42 PM

Nothing makes you feel more like a heel than destroying your child's "security blanket". The look she gave made my heart break, but the results were outstanding! She speaks clearly now and doesn't even think about the bink...

UPDATE: Almost 2 months later, I left a binkie in plain sight for her to find. She picked it up, and immediately put it back down unused. She has no desire for them any more!